Polyolefins such as polyethylene, polypropylene are widely used, and these are absolutely necessary for our daily life. Design and synthesis of new type of efficient transition metal catalysts for precise olefin polymerization has been one of the most attractive subjects, because it is highly expected that new type of polyolefins which possess unique properties which are not seen in ordinary materials will be able to be precisely prepared by using these new catalysts.

KN already introduced a “new concept” for designing the efficient catalysts in this field.  One of the most successful examples are nonbridged half-titanocene catalysts, Cp’TiX2(L) [Cp’ = cyclopentadienyl group; X = halogen, alkyl; L = anionic ancillary donor ligand].  These catalysts exhibit unique characteristics that cannot be achieved by ordinary metallocene and linked half-metallocene (called constrained geometry) type complex catalysts especially in synthesis of new polymers by ethylene copolymerizations.  The notable features by adopting this catalysis can be summarized as follows.

1) Efficient catalyst for the desired (co)polymerization can be simply tuned by modification of both cyclopentadienyl fragment and anionic ancillary donor ligand.  Various efficient ethylene copolymerizations (high catalytic activity, comonomer incorporation) can be thus attained by the ligand modification.

4) Synthesis of new polyolefins by copolymerization of ethylene with so called “traditionally unreactive” monomers such as disubstituted-α-olefin like 2-methyl-1-pentene, cyclohexene, vinyltrialkysilanes can be achieved for the first time in this catalysis. 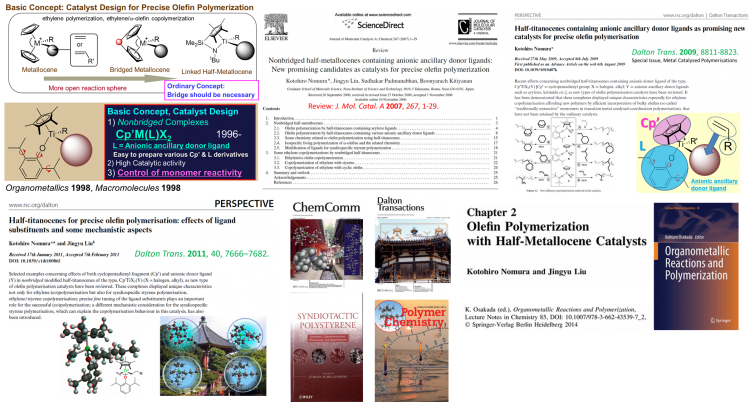 K.N. also succeeded a demonstration of designing efficient complex catalyst based on vanadium. (Imido)(aryloxy)vanadium(V) complexes were found to exhibit exceptionally high catalytic activity for ethylene polymerization.  This complex is also an efficient initiator for ring-opening metathesis polymerization of cyclic olefins.  The role of organoaluminum compound plays an essential role for both polymerizations as cocatalysts.  This group also focuses on synthesis and reactivity of organo-vanadium complexes including isolation of “olefin metathesis active” vanadium-alkylidenes.  More recently, we demonstrated that certain (imido)vanadium(V) complexes exhibited especially notable both activity and selectivity for ethylene dimerization.  We also recently demonstrate that vanadium(V)-alkylidene complex efficiently activates 1,2-C-H bond of benzene. 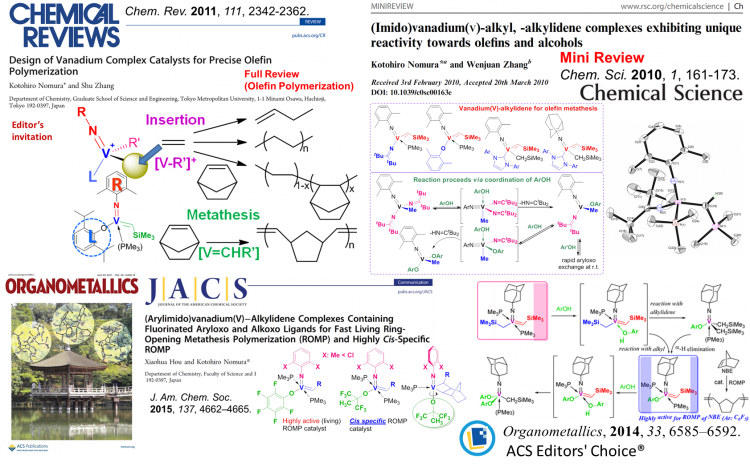 Another project is to synthesize new functional polymers by living ring-opening metathesis polymerization (ROMP).  Since the molecular weight (number of repeating monomer unit) can be precisely controlled only by varying the monomer/initiator molar ratios in this technique, also since various functional group can be introduced, unique properties that are not seen in ordinary materials can also be observed for the resultant polymers.  Precise syntheses of various graft copolymers, poly(macromonomer)s by repeating the ROMP (“grafting through” approach), multi-clock copolymers possessing different main chain by “grafting to” approach have been attained especially by quantitative end-functionalization by adopting this method using molybdenum-alkylidene (so-called Schrock type) catalysts.  More recently, we succeeded precise preparation of soluble star shape polymers and their quantitative end-functionalization via “core-first” approach.

Moreover, we recently demonstrated that stereo-regular (all-trans), high molecular weight, “defect free” (without termination of conjugated units, any negative impurities such as halogen, sulfur etc.) poly(9,9-dialkylfluorene-2,7-vinylene)s (PFVs), poly(2,5-dialkylphenylene-1,4-vinylene)s (PPVs) could be prepared by acyclic diene metathesis (ADMET) polymerization of 9,9-dialkyl-2,7-divinyl-fluorene using molybdenum, ruthenium catalysts under optimized conditions.  The resultant polymers possess better optical properties owing to the above characteristics.  Moreover, the resultant polymers prepared by Ru possessed well-defined polymer chain ends (as vinyl group), and we thus demonstrated that a facile, exclusive end-functionalization can be achieved by treating the vinyl groups in PFV with Mo followed by Wittig-type cleavage with various aldehyde.  The approach not only demonstrates that precise synthesis of end-functionalized conjugated polymers for the first time, but also demonstrates that the emission properties can be modified by introduction of functionality at the chain ends (exemplified by introduction of oligo thiophene moiety).  Some of these projects were collaboration with Prof. Y. Geerts (Univ. Brussels). 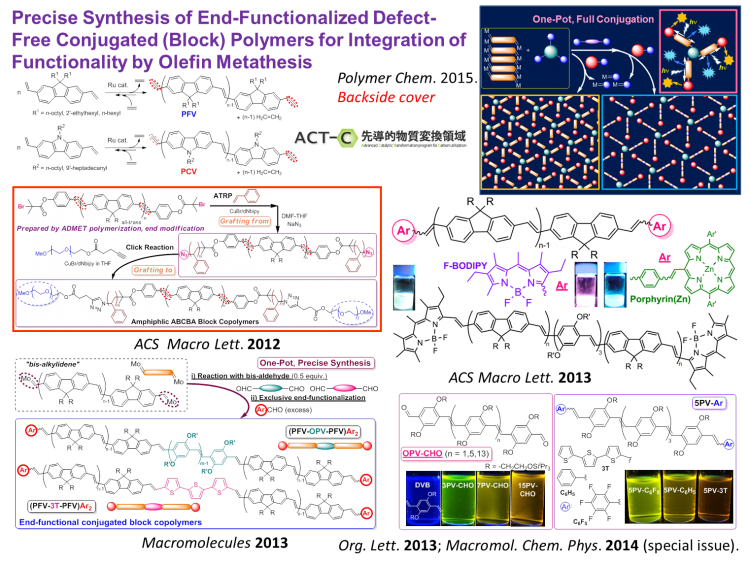 The object on this project is to find efficient homogeneous catalyst for chemoselective organic transformations directed towards Green & Sustainable Chemistry (GSC).  Photocatalytic dehydrogenation of alkane affording alkene and dihydrogen using carbonyl(chloro)rhodium(phoshine) complexes, transition metal catalyzed chemoselective reduction of aromatic nitro compounds by CO and water conditions are his initial projects.  Dimerization of propylene affording 2,3-dimethylbutenes using homogeneous nickel-phosphine catalysis has been one of the most successful example, and has been commercialized in chemical industry.